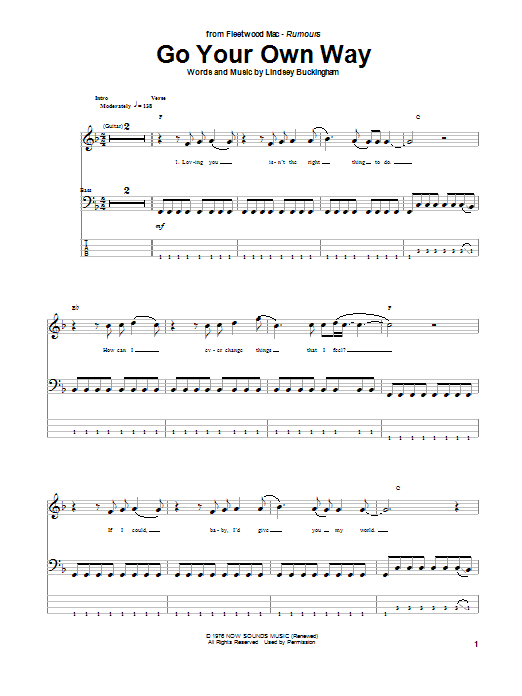 Solo it up for me. We've already been high-fiving one another. It's great. I remember him walking into the control room as white as a ghost, and of course everyone rallied around him, but then there was John and Christine's break-up. She'd sneak her new boyfriend into the studio just as John was walking out through another door, and we were kinda ducking — 'When are the two chemicals going to mix? When are we going to have the explosion?

I remember them singing background vocals to 'You Make Loving Fun', sitting on two stools in front of a pair of microphones, directly facing me on the other side of the control room glass, and if we had to stop tape for whatever reason, during the few seconds that it was being rewound they'd be shouting and screaming at one another.

I'd be thinking, 'Go tape, go tape, hurry, hurry, let's hit play! In fact, it was pretty harmonious compared to other sessions I'd do later on.

This often revolved around recording new parts once the basic backing tracks had all been completed. It felt nice and fresh because we kept rotating everything. You see, I really think the whole topic of drugs on those sessions has been overplayed. Yeah, that stuff was around, but it wasn't like everybody was crawling all over one another, and I don't think it got in the way of the music-making. It was more a case of 'Hey, we're all getting kind of tired. Maybe we should get some coke. Fourteen to 15 hours didn't leave enough time, so every day we pushed back another two or three hours.


You know, 'It's two in the morning, but let's try to start at noon tomorrow. We were always trying to push ourselves to get in at a decent time, but eventually we were starting at 10 o'clock at night and finally we said, 'OK, this is crazy. However, we felt like we weren't getting enough done and that we couldn't keep taking days off, so the coke seemed like a good solution. Today that wouldn't be the case; I would just say, 'We're taking Saturday and Sunday off, everybody have a good night's sleep, have a good time, and we'll see you bright and early Monday morning.

Although Ken Caillat generally didn't edit between takes, there were one or two exceptions, the most notable of which was a track titled 'Keep Me There', recorded during the first few weeks at the Sausalito Record Plant, and described by him as a 'weedy song' with a three-minute bass-and-guitar solo that evolved into 'The Chain'. He actually had me take some blank tape and cut it in exactly where the verses were. So we got rid of the verses, and then he had Mick play the kick-drum part — we didn't know what the hell Lindsey was doing.

He kept the drums and bass on the chorus, although he changed the key of the song and changed the chords, and he also came up with an all-new kick drum on the verse and new background parts. That's how he came up with 'The Chain'. We cut the hell out of that tape.